However, due to the ongoing COVID-19 pandemic, governments of several countries are taking measures to restrict activity, in order to curb the spread of the disease. Countries are currently focused on the economic and health threats of COVID-19. In such a scenario, manufacturers of anode material for automotive lithium-ion batteries across the globe have been witnessing an adverse impact of this crisis, which, in turn, is temporarily hindering the growth of the anode material for automotive lithium-ion battery market. 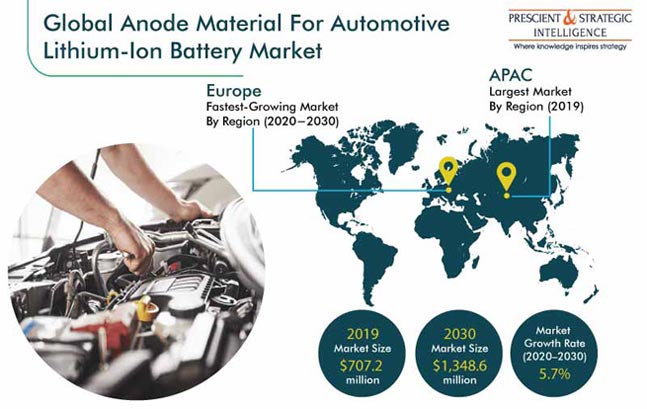 In 2019, the artificial graphite category accounted for the largest size in the anode material for automotive lithium-ion battery market, when segmented on the basis of type, and it is projected to remain the largest during the forecast period. This is attributed to the benefits of this material over other anode materials such as enhanced power output and/or energy density, lower cost, and better recycling performance.

The commercial vehicle category is projected to advance with the fastest pace in the anode material for automotive lithium-ion battery market during the forecast period, in terms of revenue, when segmented on the basis of vehicle type. Furthermore, the category is expected to remain the second-largest category, following passenger cars, throughout the forecast period. This is because the battery used in electric commercial vehicles, including trucks and buses, need to have a high energy density and battery capacity, which makes these batteries and their components more expensive.

In 2019, the BEV category generated the highest revenue in the anode material for automotive lithium-ion battery market, when segmented on the basis of vehicle technology. The dominance of the category is primarily attributed to the fact that unlike hybrid electric vehicles (HEV) and plug-in hybrid electric vehicles (PHEV), BEVs have only one source of power (i.e., electricity), which contributes to the higher adoption of lithium-ion batteries in BEVs, thus creating the highest demand for anode material.

APAC had been the largest contributor to the anode material for automotive lithium-ion battery market till 2019, and it is projected to remain the largest market in the forecast period. The dominance of the region is driven by the huge demand for electric vehicles in China. This large market size of China is majorly due to the fact that government authorities here have been providing infrastructural support such as charging station spaces, offering incentives and subsidies, and pouring huge sums in the electric vehicle industry.

Globally, Europe is projected to advance with the highest rate in the anode material for automotive lithium-ion battery market during the forecast period. This is buoyed by the fact that the European Union has planned joint efforts with battery manufacturers and commercial lenders to build an ecosystem, with a huge investment, to become self-sufficient in battery production for the purpose of powering electric vehicles. For instance, the European Investment Bank provided the primary approval for a $392.0 million loan in 2018 to Northvolt Ett to set up a battery Gigafactory in Sweden. Additionally, the German government is planning to ramp up the domestic production of battery cells for electric vehicles.

The inflow of investments is a major trend in the anode material for automotive lithium-ion battery market. During the charging process, the anode absorbs a large number of lithium-ions. Graphite can handle them well, but a silicon anode swells more than 300%, causing its surface to crack and the energy storage performance to drop rapidly. Lithium-metal anodes do not present an expansion problem, but they are expensive and present other technical problems. As a result, original equipment manufacturers (OEMs) are shifting their focus to developing anode materials with different concentrations of silicon.

OEMs and academic institutions are investing heavily in research and development (R&D) to produce more such materials, as they realize that the enhancement in lithium-ion battery centers on increasing the abilities of its individual components. OEMs have also engaged in many joint ventures, wherein they have tied up with or funded the research programs of institutions working on the development of such products. These investments are being made to create batteries with a high power density, long life, low cost, high performance, and environment-friendly nature.

Some of Key Market Players in Anode Material for Automotive Lithium-Ion Battery Market Are:

Based on Vehicle Technology