Asia-Pacific (APAC) is expected to witness the fastest growth in the air ambulance services market during the forecast period. The factors driving the advance of the regional market include the rising number of road accidents, growing provision of helicopter ambulance services by large healthcare facilities, and increasing prevalence of life-threatening diseases, requiring immediate advanced medical care. 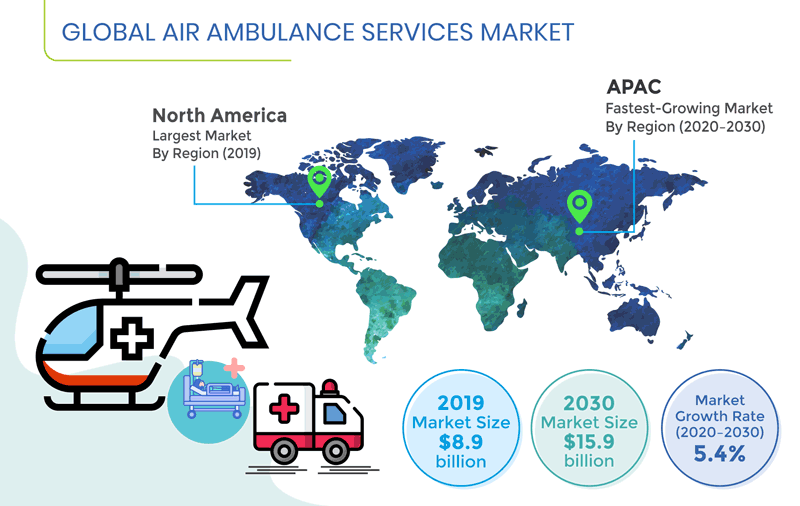 The major trend being observed in the air ambulance services market is the increasing government efforts for deploying these services. For instance, in China, the government is demarcating up the pilot project areas for providing air transport to patients in critical conditions, in places with a lack of medical facilities. This move is being implemented by the joint action plan of the Civil Aviation Administration of China and National Health Commission.

The increase in the number of helicopter bases for these services and number of patients being transported, especially in developing countries, including China and India, is a key driver responsible for the growth of the air ambulance services market. The transportation of the patients from the injury site and among hospitals has gained significant momentum in the past few years. This is leading to the increase in the number of service providers in various countries and expansion of the services by the players based in developed countries across various developing countries.

The key opportunity for the air ambulance services market is the utilization of hybrid and electric vertical take-off and landing (VTOL)-technology-equipped aircraft in the near future, in the rotary-wing category. Currently, various aerospace companies are working upon the designing of these aircrafts globally. Upon commercialization, this will create new opportunities for the aircraft operators to provide services at lower operational costs. 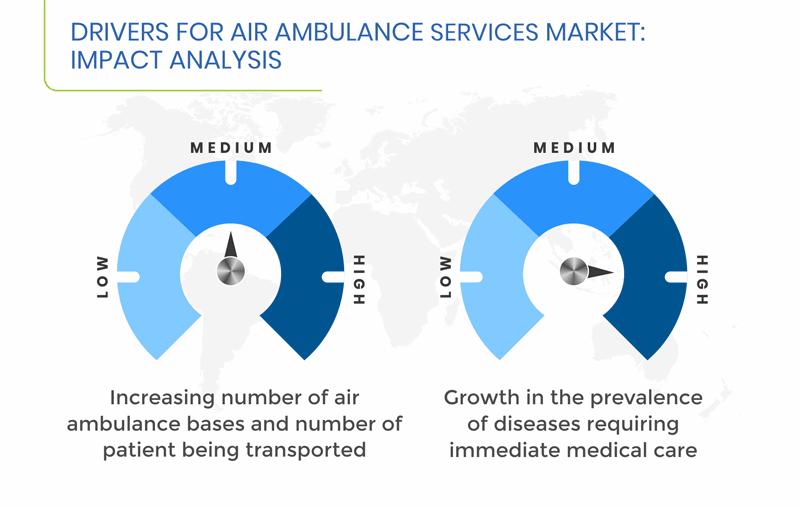 The rotary-wing or helicopter category dominated the air ambulance services market during the historical period (2014–2019), when segmented on the basis of aircraft type. It is mainly credited to the fact that the majority of the patient transportation occurred for short and medium distances, within the state or city boundaries in a country. Additionally, characteristics such as a smaller take-off and landing area and hovering capabilities were also responsible for the category’s larger share.

The air ambulance services market is expected to witness faster growth in the hospital-based category during the forecast period, based on service type. It is attributed to the increasing addition of these services by large hospitals chains, worldwide. Additionally, in this service type, the hospital personnel provide on-board medical services during the flight and arrange the shifting of the patients to hospitals with advanced facilities.

Globally, North America dominated the air ambulance services market during the historical period, holding an over 55.0% revenue share in 2019. The is mainly owing to the presence of a large number of giant service providers in the U.S., covering the majority of the states. Additionally, the country already features the infrastructure required for these services. Moreover, the high per capita income leads to the greater affordability of these services by the people during emergencies.

The APAC air ambulance services market is projected to witness the fastest growth during the forecast period. This is majorly due to the rising incidence of cardiovascular diseases requiring immediate advanced medical care, in various countries, such as China and India, and increasing affordability of these services. Additionally, the government in few countries, including China, India, and Japan, is implementing these services and collaborating with service providers for the betterment of the healthcare sector.

In recent years, many players have taken strategic measures, such as collaborations, mergers and acquisitions, and fleet expansions, to gain a competitive edge in the global air ambulance services market. For instance, in April 2019, Air Medical Group Holdings signed an agreement to acquire SevenBar Aviation LLC, a privately held airborne medical service operator, on both fixed and rotor-wing aircraft, for the leading healthcare organizations.

Similarly, in February 2019, Russian State Corporation (Rostec) delivered four Ansat helicopters and four Mi-8 helicopters, in medical configuration, to the country’s National Air Ambulance Service (NAAS). It is also planned that by 2021, Rostec will supply 46 Mi-8 and 104 Ansats, with medical modules, to NAAS.