The ongoing coronavirus pandemic has impacted several markets across the globe; however, it had quite a weak negative effect on the agrochemicals industry in the first quarter of 2020. This is ascribed to the high amount of inventory holdouts, amounting to supplies of over two quarters. 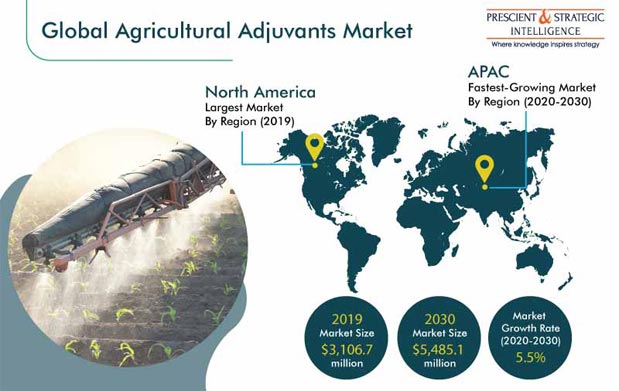 Between activator adjuvants and utility adjuvants, the former category is expected to witness the faster growth during the forecast period, on the basis of function. Activator adjuvants are suitable for a wide range of applications, owing to their ability to reduce the surface tension and increase the solubilization. Owing to such properties, its adoption is increasing at a fast pace for other applications. With the increasing adoption of activator adjuvants, the agricultural adjuvants market is expected to witness strong growth during the forecast period.

The activator adjuvants category is further sub-categorized into surfactants and oil-based adjuvants. Of these, surfactants held the larger share in 2019, owing to their superior emulsifying properties. Moreover, certain surfactants can also alter the viscosity and crystalline structure of the leaf and stem surface, thereby facilitating easier penetration of the pesticide formulation.

Surfactants are further categorized, on the basis of type, into non-ionic, ionic, and amphoteric. Among these, non-ionic surfactants held the largest share in 2019, as they do not possess any charge and have a high degree of compatibility with a wide array of fertilizer solutions. In addition, these products are unreactive with pesticide formulations and do not compromise the pesticides’ efficacy.

Alkoxylates held the largest market share in 2019, on the basis of chemical group. Alcohol-based derivatives of alkoxylates are largely preferred with pesticide formulations, owing to their non-ionic/non-reactive nature. They are primarily used for the treatment of biddy bush (Cassinia arcuata), Chinese apple (Ziziphus mauritiana), giant bramble (Rubus alceifolius), and tobacco weed. Due to their advantageous properties, the category is projected to retain its dominance in the coming years in the agricultural adjuvants market.

Built-In Category To Retain Its Dominance throughout Forecast Period

In 2019, the built-in category held the larger share in the agricultural adjuvants market, on the basis of formulation, and the trend is likely to continue during the forecast period. This is attributed to the large-scale preference of farmers for built-in formulations, owing to their ease of application and lower cost, in comparison to tank-mix formulations.

Herbicides held the largest share, based on application, in 2019, and the category is projected to retain its dominance in the coming years. This can be ascribed to the fact that adjuvants in the agricultural sector envisage high economic advantages and incentives to farmlands and agricultural installations, when used in herbicides, owing to which they witness a high-volume consumption. With the increasing demand for herbicides, the agricultural adjuvants market is poised to witness strong growth in the coming years.

The cereals and grains category showcased the highest consumption of the compound in 2019, on the basis of crop type. With the rising global population, along with the scarcity of land for crop cultivation, there is an increased pressure to maximize the crop yield, primarily cereals and grains, from existing farmlands and agricultural installations. In order to consume the required nutrition, the demand for cereals and grains is at a rise, which, in turn, is propelling the agricultural adjuvants industry.

Geographically, the North American agricultural adjuvants market held the largest share in 2019. This is majorly attributed to the presence of local manufacturers, coupled with a wide array of products, customer appreciation, and regulatory support to adjuvant manufacturers and related agrochemical companies. Moreover, federal regulations governing the application of such adjuvants are virtually non-existent in the U.S., which, in turn, promotes the growth of the agricultural adjuvants market in North America.

APAC is expected to demonstrate the fastest-growing consumption in the agricultural adjuvants market during the forecast period, primarily on account of the rapidly increasing usage of such agrochemicals in developing countries, such as China and India. In 2019, China and India were the two most populous nations in the world, home to nearly 19.0% and 18.0% of the global population, respectively. Furthermore, by 2050, these countries are expected to add an additional 2.3 billion people to the global population.

This increase in population is expected to stimulate the demand for food, to meet the per capita food and nutritional requirements in the region, in turn, boosting the agricultural adjuvants market at a rapid pace. 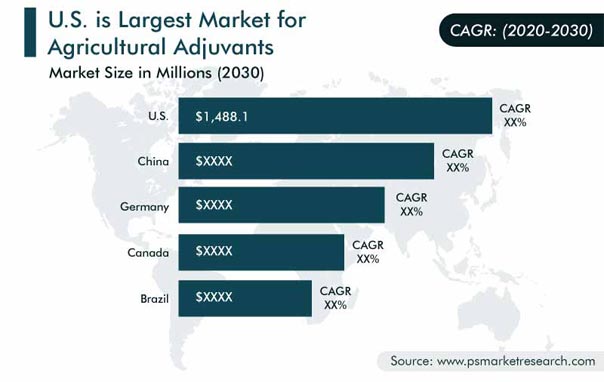 A shift in the preference from chemically synthesized adjuvants to environment-friendly alternatives is being observed as the latest trend in the market. Traditionally, adjuvants were chemically synthesized from derivatives of alkoxylates, sulfonates, organosilicones, and amines, which have proven harmful to the environment. Additionally, a majority of these agrochemicals have been identified as phytotoxic, which is a potential threat to the food chain, owing to which manufacturing companies are focusing on the development of environment-friendly adjuvants, which are biodegradable. For instance, in February 2018, Evonik Industries AG launched two new sustainable adjuvants for the agriculture sector, namely BREAK-THRU SP 131 and BREAK-THRU SP 133. 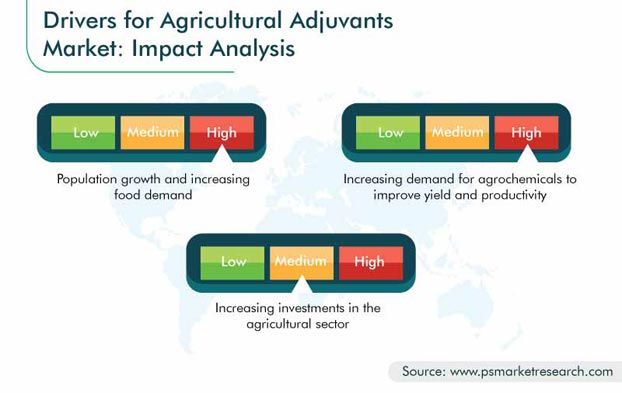 In recent years, the worldwide population has witnessed a huge spur, owing to which the global food demand is witnessing a surge. According to the Population Division of the United Nations Department of Economic and Social Affairs (UNDESA), the global population was 7.6 billion in 2017, and it is expected to reach nearly 9.8 billion by 2050, growing by 30.9% in the next 33 years. This additional population, of nearly 2.2 billion, is expected to create a additional demand for food crops, horticulture crops, and cash crops in the coming years, in turn, promoting the agricultural adjuvants market advance.

The rapidly growing population is creating immense pressure on farmers to improve the productivity of agricultural farmlands and related installations. Owing to this, advancements in the farming technologies, coupled with the use of agrochemicals (such as herbicides, insecticides, and pesticides) and adjuvants, serve as a key solution to this conundrum. Therefore, such factors are expected to propel the demand for the compounds, in order to generate higher yields, in turn, benefitting the agricultural adjuvants market.

The agriculture sector is expected to receive massive investments and capital flows, primarily for the development of new products, for higher yield and better crop quality. Recent trends showcase a rise in the direct investments in agriculture sector, such as venture funding in agricultural technologies. Additionally, with an increasing focus on farm management, farm robotics, farm agrochemicals, novel farming systems, and supply chain technologies, the agricultural adjuvants market holds a strong potential for growth during the forecast period.

The agricultural adjuvants market is consolidated in nature, with the presence of a few large-scale players, such as BASF SE, The Dow Chemical Company, Nouryon, Clariant International Plc, Solvay S.A., and Croda International Plc.

Players in the industry are launching new products, in order to improve their market coverage and stay ahead of the other market players. For instance: 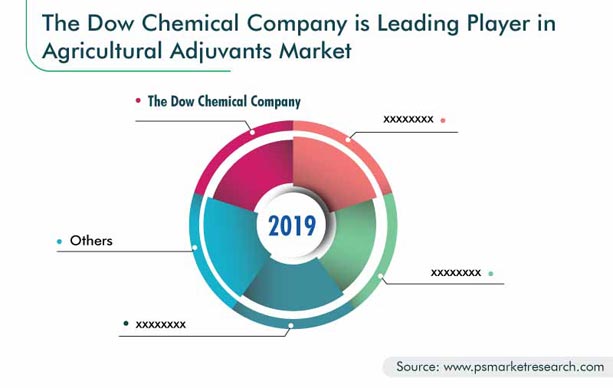 Some of the key players in the agricultural adjuvants market include:

Based on Chemical Group