The global aerospace titanium blisk market was valued at $3,988.3 million in 2017 and is forecasted to witness a CAGR of 3.7%, during 2018-2023. The global aerospace industry is registering rise in demand for military as well as commercial aircrafts. The low weight and high strength of titanium based blisks, decreasing titanium prices, and increasing aircraft sales are the key factors driving the market growth.

Based on application, the aerospace titanium blisk market has been categorized into military, commercial, general aviation, and others, wherein “others” category includes experimental and model aircrafts. Commercial aerospace titanium blisk market accounted for the highest market share in 2017. This can be attributed to rising passenger as well as cargo demand throughout the world. As per the International Air Transport Association (IATA), there was a significant growth in the number of scheduled passengers that boarded commercial airlines in the past decade; with 2,452 million passengers in 2007 to 4,093 million in 2017. This has led to growing demand for commercial aircrafts, which in turn, is pushing the demand for titanium blisk in commercial applications.

Based on region, North America held the highest market share of in 2017, with a revenue of $1,735.6 million. This is attributed to the high demand for business fleets in the region. In North America, aircraft fleet size of the business aviation market in 2017 stood at 24,297 units, with Europe at 3,894, and Asia at 2,701. However, Asia-Pacific region is expected to witness the highest growth rate, during the forecast period. This can be attributed to several factors such as increasing passenger traffic, cargo demand, as well as beefing-up of air forces by countries such as India and China.

One of the key trends observed in the market is the use of additive manufacturing technique to produce blisks by two different processes namely, power bed fusion (PBF) and directed energy deposition (DED). Additive manufacturing technique enables to reduce material wastage and increase design freedom. This process overcomes the drawbacks of computer numerical control (CNC) machining such as chipping and complexity of design. The technique also enables to reduce weights from the middle of the disk as well as from the blades and can create web like structures to save material which further reduce weights.

One of the key opportunities for the players in aerospace titanium blisk market lies in the production process of the blisks through a process called linear friction welding. This process uses high pressure to push two moving parts against each other rapidly creating heat and joining the components permanently to each other. This creates a single piece blisk and removes the complexity of CNC manufacturing as well as the high cost incurred in the additive manufacturing process. This not only saves the material, but also achieve all necessary strength goals. 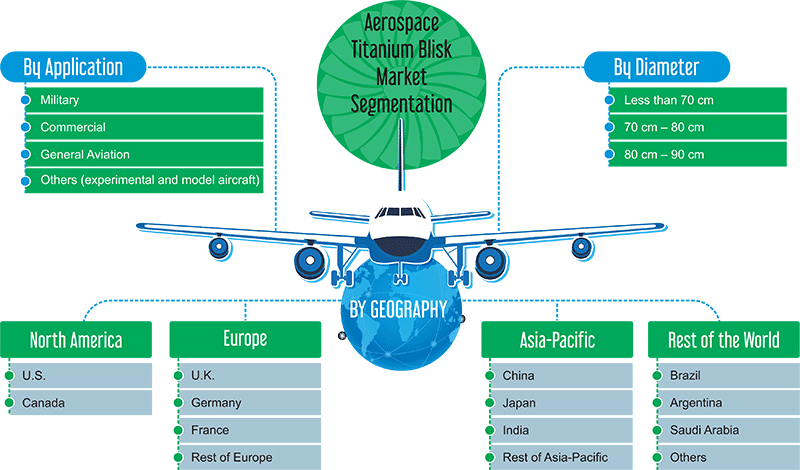 Some of the key players in the market include, MTU Aero Engines AG, GKN plc, Rolls-Royce Holdings plc, and GE Aviation.