The global 3D printing filament market generated revenue of $693.1 million in 2019. The market size is expected to reach $7,082.0 million by 2030, showcasing a CAGR of 26.8% during the forecast period (2020–2030). This massive growth can be attributed to the rising rate of adoption of the 3D printing technology in the aerospace industry, which is growing at a considerable pace itself, thereby increasing the demand for 3D printing filaments.

Due to COVID-19, the demand from the 3D printing filament market, for filaments, has witnessed a decline, since most of the companies are reducing their capital and operational expenditure. Since the 3D printing technology is expensive in comparison to other available options, the demand for such filaments is expected to witness a negative impact, owing to the crisis. However, the fall in the demand is temporary, since 3D printing is an effective way for companies to reduce the dependence on raw material or equipment suppliers. 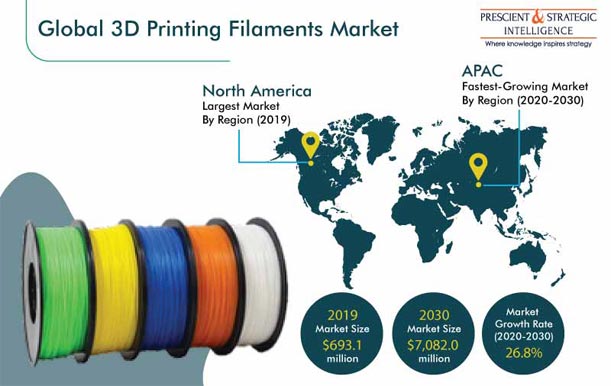 Based on type, plastic-based filaments accounted for the largest size in the 3D printing filament market in 2019. The low material cost, easy availability, and less intricacy of plastic-based filaments make them the preferred choice over other types of filaments. Moreover, since the cost of 3D printing is high, it is quite essential to decrease the overall cost of printing a product using this technology. Plastic, to some extent, decreases the manufacturing cost, thus becoming the preferred choice of manufacturing companies.

On the basis of application, the consumer goods category is expected to demonstrate the fastest growth in the 3D printing filament market during the forecast period. The consumer goods industry is highly competitive and requires new products in a short time, to attract consumers. Therefore, companies are adopting the 3D printing technology to improve the product aesthetics and functional appeal. Since the technology takes less time to develop a model or product, which eventually reduces the time for research and development (R&D), it increases the available time for the product’s marketing. Owing to such factors, the technology is likely to witness a fast-paced adoption in the consumer goods sector, in turn, helping this category grow the fastest during the forecast period.

Geographically, the North American region held the largest share in the 3D printing filament market in 2019, and the trend is likely to continue during the forecast period. The region adopted the technology in its initial stages, and from then onward, companies in the region have been investing in it, in order to integrate it with the traditional manufacturing machines, which has led to the large market size of the region in the 3D printing filament market.

Moreover, the presence of big players in the region, such as DuPont de Nemours Inc., Stratasys Ltd., 3D Systems Corporation, and Huntsman Corporation, is also aiding in the growth of the 3D printing filament industry, as these companies are actively developing new products and methods to decrease the cost of the 3D printing technology.

In addition, according to the China Industry Information Institute, the 3D printing industry in the country would have an output value of $7.68 billion, or one-third of the global market, by 2020. Therefore, such factors are expected to propel the 3D printing filament market growth in the region during the forecast period. 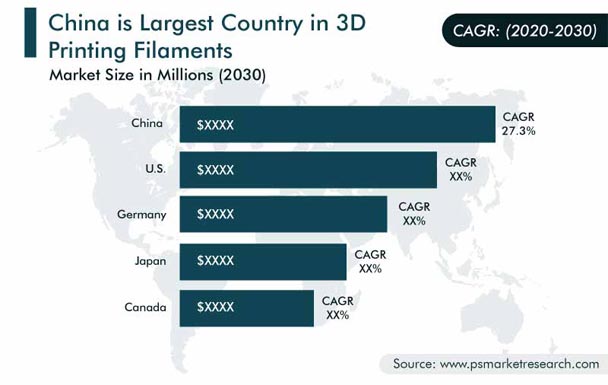 The manufacturing industry is mostly dominated by subtractive manufacturing, which involves molding, casting, forging, extruding, and cutting processes, for product manufacturing. The method is capable of mass production of objects having fewer complex designs. However, during intricate designing, the method is not as effective, in comparison to when used for less-complex products. Therefore, in recent times, companies have started using filament-based 3D printing processes, which enable product development with improved aesthetics. This is leading to the increasing demand for filaments, which is subsequently boosting the 3D printing filament market.

Moreover, in traditional methods, several fixed and variable costs are associated, such as a larger number of machines and higher manpower, which is not the case with the 3D printing technology. Owing to such factors, several industries, such as automotive and medical device, have started adopting this technology in their regular manufacturing operations, which again results in the growth of the 3D printing filament market.

As per the International Air Transport Association (IATA), the total global revenue generated by commercial airlines reached $876.0 billion in 2019, compared to $845.0 billion in 2018. The data shows the growing aerospace and aviation industries, which, in turn, is leading to the increasing demand for new aircraft, in order to ferry more passengers and cargo than ever. To meet this demand, the production of aircraft components has witnessed a rise.

In order to produce these components, the 3D printing technology is proving to be effective, as it uses filaments to produce components, which results in a reduction in the weight of the manufactured products, increase in strength, achievement of complex and customized designs, and minimal wastage. Owing to the abovementioned benefits, the demand for 3D printing filaments in the aerospace industry is expected to continue to rise during the forecast period.

Currently, the automotive industry is going through a tough phase, due to a drop in the sale in 2019, because of demand and supply imbalance and COVID-19 impact in 2020. despite that automobile manufacturers are making hefty investments in R&D to reduce the weight and increase the strength of vehicles, as well as to make vehicles more aesthetically appealing. Owing to such factors, companies have started to create components such as interior accessories, air ducts, full-scale panels, and functional mounting brackets via filament-based 3D printing, which propels the growth of the 3D printing filament market.

Further, as per Organisation Internationale des Constructeurs d'Automobiles (OICA), the total number of vehicles produced throughout the world was 95.6 million in 2018. The large-scale production of vehicles is eventually resulting in an increasing demand for automotive components and parts, some of which are now being developed using the 3D printing technology. This is likely to increase the demand for 3D printing filaments in the automotive industry and aid in the development of the 3D printing filament market

These players are using the strategy of product development, in order to capture new customers and enhance their market share. For instance, 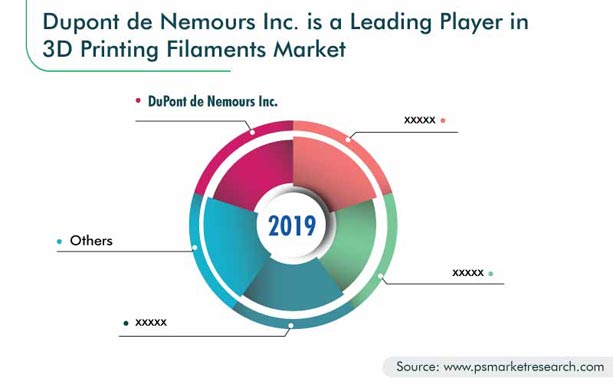 Some of Key Players in 3D Printing Filament Market Are: