The quantum computing market size is predicted to rise from $89.6 million in 2019 to $1,866.8 million by 2030, while progressing at a CAGR of 33.1% during 2020 and 2030. The key growth driver for this market is the surging investments in the field of quantum computing by various governments and private companies.

Geographically, the European region will register the fastest growth in the coming years. This is due to the rapid economic development, massive information technology (IT) spending, robust research and development (R&D) activities, increasing inclination toward advanced technologies, and expansion of the manufacturing and aerospace & defense industries in the region. 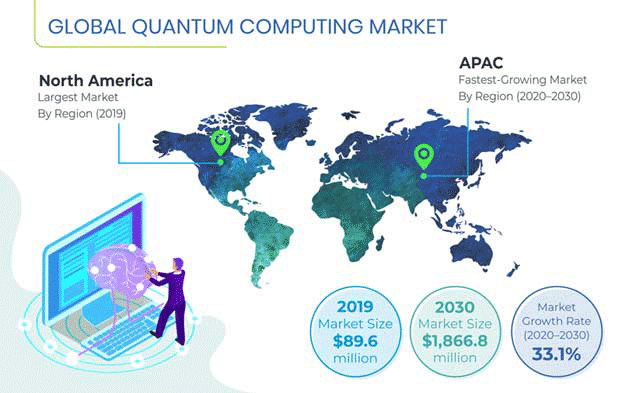 The market for quantum computing is thriving because of the soaring investments being made by governments and private firms. In the last few years, especially after 2014, there has been a significant rise in the number of government initiatives supporting quantum information processing. Moreover, several governments are providing huge funding to R&D activities in the field of quantum computing, which is propelling the market growth.

The market is observing several strategic developments across the world, primarily in North America. Private firms are also making huge investments in the technology in order to gain a competitive edge in the quantum computing market. For instance, North American companies, such as International Business Machines (IBM) Corporation, Google LLC, and Microsoft Corporation, are aggressively working for the development and commercialization of this technology.

Similarly, in China, the leading e-commerce player, Alibaba Group Holding Limited is building its own lab dedicated to quantum computing. Further, the government of China is building a $10-billion national lab for quantum research in Hefei, and plans to open it by 2020.

The market for quantum computing solutions is also witnessing a huge rise in simulation work for quantum computing. Market players are proactively working for developing numerical simulation of quantum systems, as it is critical for the further understanding of natural phenomena. But, the development of these systems needs more processing power. Classical computers are not able to provide an accurate solution, neither numerically nor analytically, to the models that describe many systems of key interest and importance in domains such as quantum chemistry and superconducting materials.

To offer accurate solutions, quantum computers are being used across the world. This is massively boosting the quantum computing market advancement. Moreover, quantum simulation will become one of the earliest applications of quantum computers, as they make useful results, which were beyond the reach of classical computation, accessible with fewer than a hundred qubits. 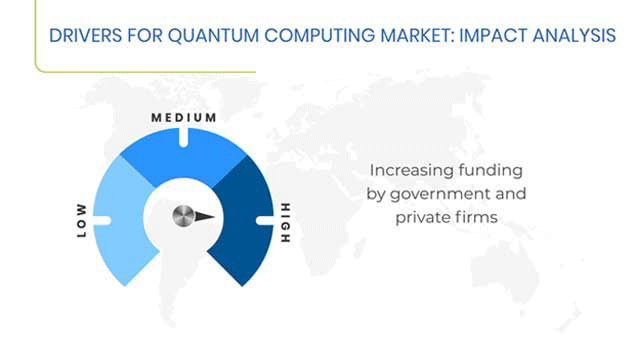 The hardware category, within the offering segment, held the largest revenue share in the market in 2019. This was because the quantum computing market was still at a nascent stage at that time and thus, the key players mainly focused on investing in the development of robust hardware equipment.

The consulting services sub-category of the service category is expected to register the fastest growth in the quantum computing industry during 2020–2030. This can be ascribed to the difficulty in the development of this technology, on account of the high level of expertise required in the field.

The optimization category, under the application segment, was the largest contributor to the market for quantum computing solutions in 2019. This is because most of the organizational problems revolved around the streamlining of business operations and thus, the requirement for optimization solutions was very high. To meet this demand, market players focused on developing solutions that can be adopted for optimization purposes.

The North American region generated the highest revenue in the quantum computing market in 2019, due to hefty investments made by government and private firms for the development of the technology in the region. For instance, in January 2019, the U.S. Congress passed the National Quantum Initiative, authorizing a more-than-$1.2 billion investment in quantum science and technology over the next 5 to 10 years. Such initiatives result in the increasing adoption of this technology in government, academic, industrial facilities.

Furthermore, D-Wave Systems Inc., a Canada-based company in the quantum computing market, was the first one to commercialize quantum computers, with the introduction of the D-Wave One system. This company has developed fourth-generation systems and increased the number of qubits by two times in successive generations. Its current system — D-Wave 2000Q — has 2,000 qubits. Other factors, such as the high IT expenditure, continuous technological advancements, and early adoption of emerging technologies, have also supported the expansion of the market in this region. 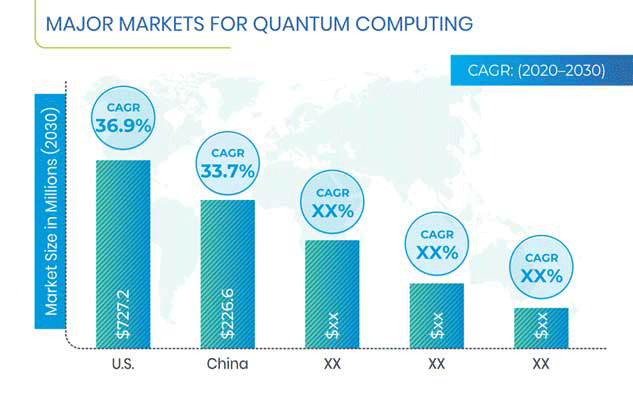 In recent years, major players in the market have taken several strategic measures to ensure their foothold. For instance, in December 2019, D-Wave Systems Inc. announced an agreement with NEC Corporation to collaborate in the areas of hybrid services, application development, and sales & marketing. In addition, under this agreement, NEC Corporation would invest $10 million into D-Wave Systems Inc.

Furthermore, in November 2019, IBM Corporation and Alpine Quantum Technologies created a new version of Qiskit (version 0.13) that support ion trap devices. Qiskit comes with a wide range of algorithms and applications, and is now available via cloud on the Innsbruck quantum devices.

Based on Deployment Type