The global plant-based protein market generated $11,104.3 million revenue in 2020, and it is expected to grow at a CAGR of 9.2% during 2020–2030. This is attributed to the rising intolerance to animal protein, increasing customers’ expenditure, and growing awareness about healthy plant-based food. 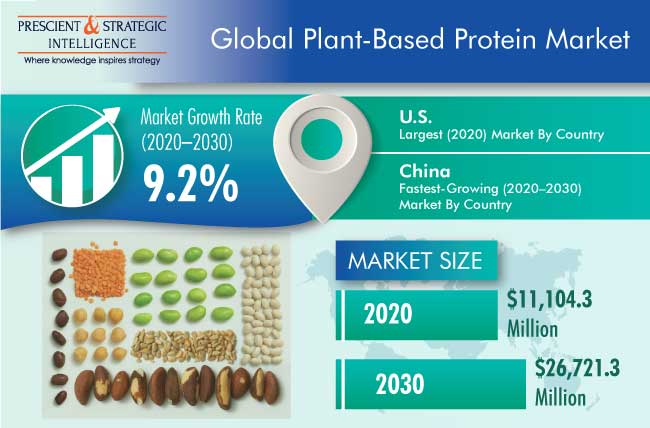 The soybean category held the largest share of the plant-based protein market, in 2020, based on source. This was primarily because soybeans are an excellent source of proteins and fat, and their high fiber content is beneficial to digestive health. Hence, there is a high demand for soybean to manufacture protein products and are being considered the best alternative for meat. In addition, these proteins are also used for various food applications, including emulsion-type sausages, dairy replacers, and nutritional bars; and are also used as nutritional ingredients in livestock feed, aquaculture, and pet food products.

The dry category held the larger share in 2020 in the market, based on form. This was primarily because dry food products are easy to handle and convenient to cook. Also, the demand for dry plant-based protein products has increased among millennials because plant-based proteins consist of low calories and fat, as compared to the animal proteins; due to which these are highly preferred by the athletes and fitness trainers.

The food category is expected to witness the faster growth in the plant-based protein market during the forecast period (2021–2030), based on application. This is primarily due to the increasing demand for vegan food products, growing health & wellness trends, and changing lifestyle of the people. Moreover, according to the Plant Based Foods Association (PBFA), U.S. retail sales of plant-based foods grew 11.4% in 2019, bringing the total plant-based market value to $5 billion, which in turn is resulting in the rising demand for plant-based proteins in the food industry.

The textured category is expected to witness the fastest growth in the market for plant-based protein during the forecast, based on type. This is due to the fact that the textured proteins are highly nutritious and rich in fiber and protein, and it could also support heart health and protect against heart disease and stroke. Moreover, the growing demand for meat alternatives, to lower the rate for animal killings, is propelling the demand for textured protein. For instance, according to the Animal Legal Defense Fund, in the U.S., every year, more than 9 billion animals are raised and killed on factory farms.

North America is expected to hold the largest share during the forecast period due to the transition of consumers toward plant-based foods. This is fueled by the rising focus of people on personal health, sustainability, immunity, food safety, and animal welfare. Moreover, with the advancement of new technologies and innovative experiments in the food and beverage sector, the usage of plant-based protein has been dominant in the North American market, due to rise in vegan and flexitarian population.

Whereas, Asia-Pacific (APAC) region is expected to witness the fastest growth in the plant-based protein market, during the forecast period. This is majorly attributed to the changes in the eating habits of customers, along with the growing concern about health, environment, and ethical issues. These issues are leading to a rise in the vegan population, which is ultimately propelling the consumption of plant-based food products. 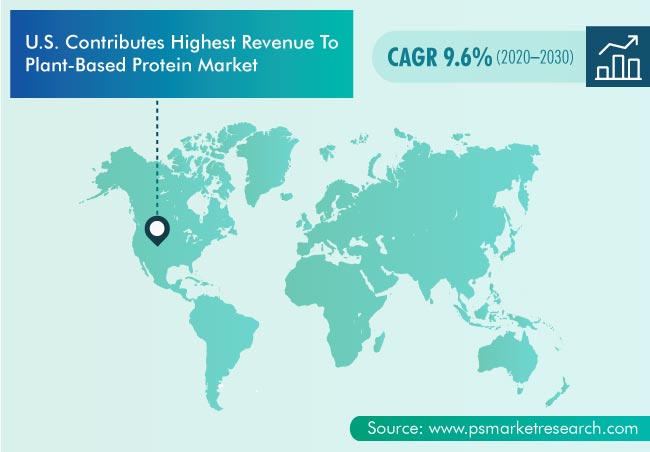 The higher consumer demand for plant-based protein, is expected to increase the sales of the plant-based protein market, especially after the outbreak of COVID–19, as consumers are more concerned about their health than ever. According to reports, vegetarians are at a lower risk of heart diseases, high blood pressure, diabetes, and obesity. Although meat proteins provide the required amino acid content to the body, they are associated with high cholesterol levels and other related issues, as a result of which consumers across developed nations are preferring more of vegan protein sources.

One of the major factors driving the market for plant-based protein is the increase in customer spending and improvement in the living standard of people across the world. According to the World Bank, the total consumer expenditure was $64.130 trillion in 2019 compared to $49.33 trillion in 2010. Thus, the increased consumer spending, couple with the rising awareness among consumers on the importance of a vegan diet for a healthy lifestyle will encourage them to invest more in plant-based food products.

Animal protein intolerance is on the rise, and its impact can be witnessed across most of the Western nations, which in turn, is driving the plant-based protein market. Regarding milk, the subsequent food allergy is presented as intolerance to lactose (the sugar in milk) or milk protein. The protein components present in milk trigger reactions to either the protein fractions in emulsion (caseins) or in whey (milk albumin). Cow's-milk protein allergy (CMPA) is the most-common food allergy of the early childhood, affecting almost 2% to 5% of the Brazilian child population less than three years of age.

The market is fragmented in nature with the presence of several key players. In recent years, players in the plant-based protein industry have been involved in mergers and acquisitions in order to attain a significant position. For instance:

Frequently Asked Questions About This Report
How big was the plant-based protein market in 2020?+

How many segments are in the plant-based protein industry report?+

What is the biggest plant-based protein market trend?+

The key trend in the market for plant-based proteins is the shift of people to healthier food items.

Why will APAC be the most-lucrative plant-based protein industry in the future?+

APAC will be the fastest-growing plant-based industry market because of the rising environmental and animal health concerns, which are leading to the expansion of the vegetarian and vegan populations.

What is the plant-based protein market nature?+

The market for plant-based proteins is fragmented due to the presence of numerous companies.