The organic fertilizers market revenue stood at $4,512.1 million in 2019, and the market is predicted to advance at a CAGR of 14.1% between 2020 and 2030. Both downstream and upstream variables, such as the increasing number of organic farms and growing acreage all over the world and burgeoning requirement for organic food products, especially in Europe and North America, are fueling the market advance.

The COVID-19 pandemic has caused severe disruptions in the supply chain in various Asian and European countries due to the imposition of partial/complete lockdowns and restrictions on trade activities. Resultingly, farmers are encountering huge logistical issues in conducting farming and other allied activities, sourcing raw materials, and selling their produce.

However, many stakeholders in the retail industry have reported that the consumer sentiment toward organic food products and beverages is rather positive and growing, because of the various health benefits of these items. This is, consequently, fueling the consumption of organic food products, which is, in turn, driving the advance of the market for organic fertilizers. 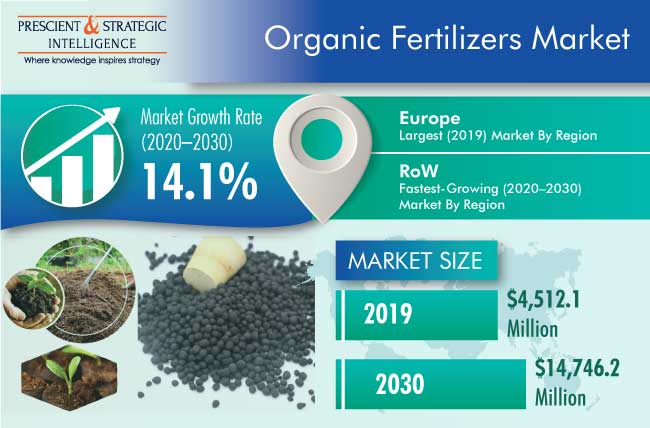 The cereals & grains category held the largest revenue share, of more than 60.0%, in 2019, under the crop type segment of the organic fertilizers market. This is because cereal and grain production accounted for the major share of the organic farming area, of around 4.8 million hectares, in 2019. According to the data released by several private and government sources, a significant portion of the organic farming area was being used for producing rice, barley, oats, and wheat due to the high downstream requirement for these items. The non-toxicological and environmentally sustainable attributes of organically farmed cereals and grains are contributing toward the expansion of this category.

The industry is bifurcated into liquid and solid fertilizers, depending on form. Of these, the solid category led the organic fertilizers market in 2019 due to the greater ease of usage of granular-form fertilizers than the liquid ones. Moreover, solid fertilizers are more likely to retain their nutritional value for a longer period. Due to these factors, this category is demonstrating rapid expansion in the market, and the situation will remain the same in the forthcoming years.

Europe had the largest market share from 2015 to 2019, primarily because it has the largest organic arable land area in the world. This is because countries such as Italy, Spain, France, and Germany have been witnessing a sharp rise in organic farming over the last few years. Furthermore, the implementation and ratification of legislations such as the Common Agricultural Policy (CAP) and the EU Regulation 2018/848, high per capita spending, and presence of an organized supply chain for supporting the production, packaging, distribution of organic produce are propelling the demand for organic fertilizers in the region.

Moreover, with the increasing deterioration of the soil quality, the popularity of organic agriculture is mushrooming, and various stakeholders in the industry, such as farmers, landowners, and policymakers, are focusing on this farming method. Additionally, the enactment of initiatives such as the Ecological Organic Agriculture Initiative (EOA-I) and several schemes by organizations such as the Network of Organic Researchers in Africa (NOARA) and African Organic Network (AfrONet) and the surging investments being made by private and government entities are driving the advance of the organic fertilizers industry in this region. 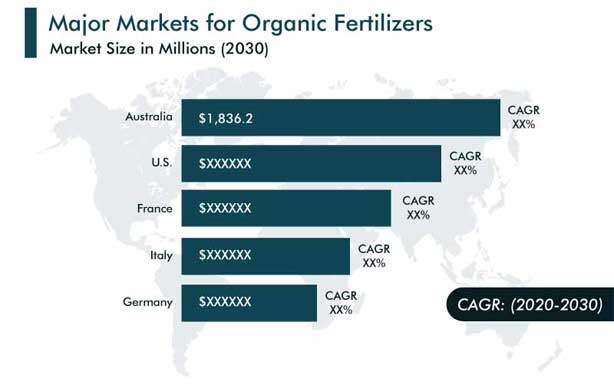 The organic farming area all over the world has grown massively over the last few years. The soaring investments by private and public players in the organic food supply chain and increasing requirement for organic products because of their health benefits and low level of chemical leaching that happens during their growth are essentially aiding the organic fertilizers market advance.

According to the data produced by the Research Institute of Organic Agriculture (FiBL), government policies and initiatives, equivalence agreements between countries for product labeling, certification, and benchmarking, and implementation of participatory guarantee systems (PGSs) are encouraging landowners to adopt organic agriculture.

The expansion of the retail organic food and beverage sector in Europe and North America is a major factor driving the growth of the market. According to the data released by the International Federation of Organic Agriculture Movement (IFOAM), the requirement for organic food products was mainly concentrated in Europe and North America, with countries such as France, Germany, and the U.S. generating a huge demand for these items due to their high per capita income. The sales of these products are predicted to further shoot up in the coming years, which will lure the stakeholders and players operating in the market.

The expansion of the market is creating a huge value potential for not only localized organic stakeholders but also for the people engaged in the organic supply chain in the LATAM and Asia-Pacific (APAC) countries. The reliance of these regions on the import of various agricultural commodities and products can be leveraged for increasing the organic product supply, which will open avenues for the organic fertilizers market growth in the forthcoming years. 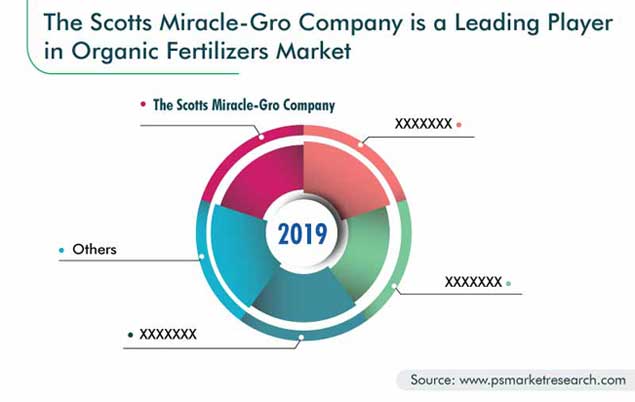 Frequently Asked Questions About This Report
How much will the organic fertilizers market grow?+