The industrial gases market revenue stood at $92,392.4 million in 2019, and it is projected to witness a CAGR of 5.5% during 2020–2030. The prime factors behind the growth include an array of diversified applications of various gases, advancement in the healthcare sector on account of the high healthcare expenditure, and numerous government initiatives supporting the usage of non-conventional energy sources.

The industrial gases industry has been witnessing a mixed positive and negative impact due to COVID-19, due to the vast application base of industrial gases. An array of gases are used in the electronics, healthcare, chemical, food processing, and oil & gas and petrochemical industries. With the coronavirus outbreak, some of these sectors, including chemical, electronics, oil & gas and petrochemical, observed a slowdown, whereas certain industries, such as healthcare and food and processing, registered significant growth. The rising number of COVID patients and spurring demand for packaged food in these times have had a positive impact on the market. 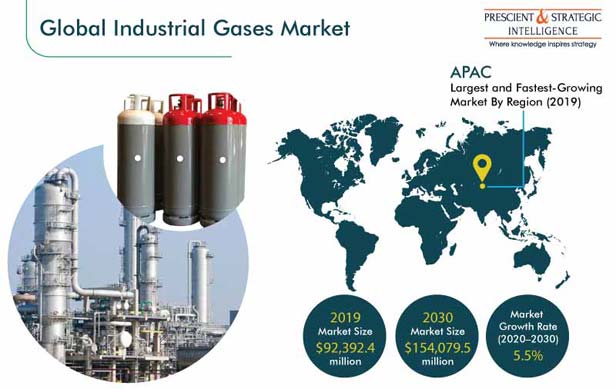 In 2019, the hydrogen category, under the type segment, accounted for the largest share due to the high-volume consumption of hydrogen gas in welding, hydrogenation of oils and fats, and production of several chemicals. Moreover, the rising investments from companies and governments in the business ecosystem of hydrogen, due to its potential as a future fuel, will boost its demand in the industrial gases market in the near future.

The on-site generation category will exhibit the fastest growth in the market for industrial gases during 2020–2030, within the delivery segment. This is ascribed to the growth in the manufacturing sector owing to the burgeoning population and rising per capita income. The manufacturing industry requires a consistent supply of gases to maintain the production rate, which can be comfortably met with on-site generation.

The oil & gas and petrochemical sector emerged as the largest end user of industrial gases in 2019 due to the increasing number of natural gas and crude oil reservoirs and rising capacity of refineries. In these reservoirs, gas and oil can only be obtained by secondary and tertiary methods of production, by using industrial gases, as they provide artificial pressure to the reservoirs.

Asia-Pacific (APAC) To Be Largest and Fastest-Growing Market

Geographically, APAC’s industries consumed the highest quantity of gases in 2019, and it is likely to continue its dominance on the industrial gases market in the future. This can be attributed to the mounting demand for manufactured products due to the vast population and large manufacturing sector in the region, especially in India, South Korea, China, and Japan, on account of low labor costs. Moreover, the less-stringent environmental regulations than in Western countries are acting as a facilitator for the regional market growth. For instance, the manufacturing output of China in 2018–2019 was nearly $4.0 trillion, whereas the output of Japan was approximately $1.0 trillion, which made up for 28.4% and 7.23% of the global manufacturing output, respectively.

This region is also expected to register the fastest growth in the market for industrial gases in the coming years, primarily on account of the escalating population and booming spending power of the people due to the increasing per capita income. Besides, the rapid shift of manufacturing companies from the West to the East has had a positive impact on the market. Businesses are shifting their bases to increase their market share and meet the burgeoning demand for products. 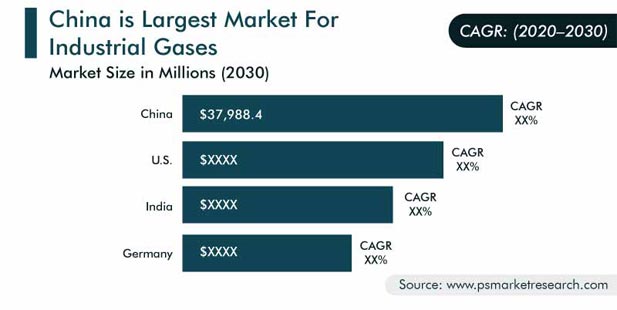 In recent years, a number of mergers and acquisitions have been observed among the key players in the industrial gases market, with companies aiming to expand their product portfolio and improve their geographical presence. For instance, in 2018, Linde AG merged with a U.S.-based gas producing company — Praxair Inc. — to form Linde Plc. Through this merger, Linde Plc came to hold the largest market share. Similarly, in 2016, Air Liquide S.A. acquired Airgas Inc., a provider of industrial gases and related products and services in the U.S.

Gases find wide applications in the chemical, heavy metal, petroleum, healthcare, electronics, and food and beverage industries. For example, carbon dioxide (CO2) is used in the food and beverage industry for making decaffeinated coffee and carbonating soft drinks and beer. Similarly, acetylene is used in the oxy-acetylene flame in the heavy metal industry for cutting and welding.

Furthermore, Invest India, a National Investment Promotion & Facilitation Agency, estimates that the demand for petrochemicals will advance at a CAGR of 7.5% during 2019–2023, with the polymer demand progressing at an 8.0% CAGR. As hydrogen is used in the production of chemicals and in petroleum refining, the demand for it will increase substantially.

The rising concerns about fossil-fuel-inflicted pollution will drive the industrial gases market during 2020–2030. The growing environmental consciousness has shifted the global interest from non-renewable energy to green energy. According to the 2015 data by the World Bank, India, the U.K., South Africa, Japan, Chile, and China invested 0.5%, 0.8%, 1.4%, 0.8%, 1.4%, and 0.9% of their total gross domestic product (GDP), respectively, in renewable energy.

Solar photovoltaic (PV) cells, one of the primary sources of green energy, are attracting heavy investments globally. Industrial gases play a significant role in the production of solar PV panels, wherein they are utilized for manufacturing wafers and reducing the loss of silicon during the ingot sawing process. This way, the gases help in reducing the overall manufacturing cost, which ultimately makes solar energy cheaper for the end user. 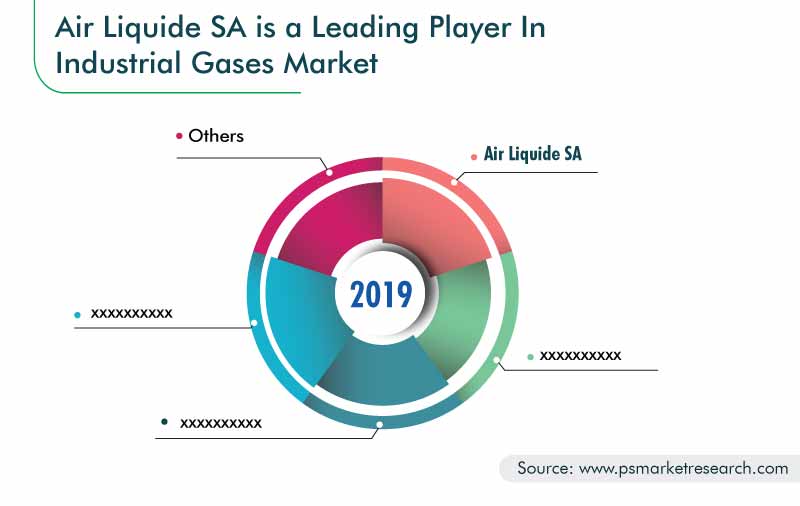