The Indonesian micromobility market was valued at $1.1 million in 2020, and it is expected to witness a CAGR of 116.1% during the forecast period (2021–2030). The major factors driving the growth of the market are the rising need for reducing urban traffic congestion, increasing demand for first- and last-mile connectivity and low price and convenience of such services for commuting.

The COVID-19 pandemic has been impacting a large portion of the people around the world, bankrupting corporations, and plunging the global economy into a turmoil. The shutdown has had a dramatic impact on the valuation of a few service providers (including Lime), staff working in the sector, and the pace of the restructuring of businesses. However, now, e-bike and e-scooter sharing is gaining widespread popularity among consumers as a new, cost-effective, and environment-friendly transportation option, which also reduces the risk of infection considerably, compared to conventional mass transit means. Some micromobility startups that had cut back or halted their operations during the lockdown are now expanding their fleet to meet the growing demand. 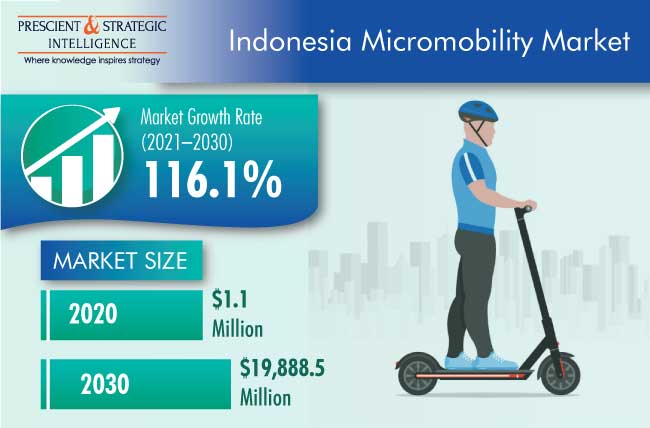 E-mopeds are expected to generate the highest revenue during the forecast period, on the basis of vehicle type, in the Indonesian micromobility market. This is mainly ascribed to the growing popularity of e-mopeds owing to the low travel cost and environmental advantages associated with them over conventional mopeds. This, in turn, is attracting more players to enter the market and expand their operations. Moreover, the vibrant moped culture and traveling patterns of people will support the adoption of e-moped services in the country in the coming days, as the majority of them (over 65%) travel less than 5 km to reach their destination.

The dockless category accounted for the larger market share in 2020, and it is expected to further advance at the higher rate during the forecast period, on the basis of sharing system. This is majorly attributed to the proliferating adoption of the dockless bike sharing concept by companies owing to its lower capital requirements and operational expenditure as compared to the docked system.

The introduction of swappable batteries has increased the fleet uptime substantially, while also reducing the operational costs, which has ultimately taken the micromobility industry toward profitability. Additionally, with the use of swappable batteries, scooter unit economies can be improved, as it not only cuts a large part of the charging costs, but also improves the vehicle availability. For instance, in November 2020, Grab Holdings Inc. collaborated with the state-owned electricity company’s local branch, PT PLN (Persero) Bali Distribution Parent Unit (UID), Bali Transportation Office, PT Pegadaian, Astra Honda Motor, and Panasonic, in order to launch seven public electric vehicle battery swapping stations (SPBKLU) in the island province. 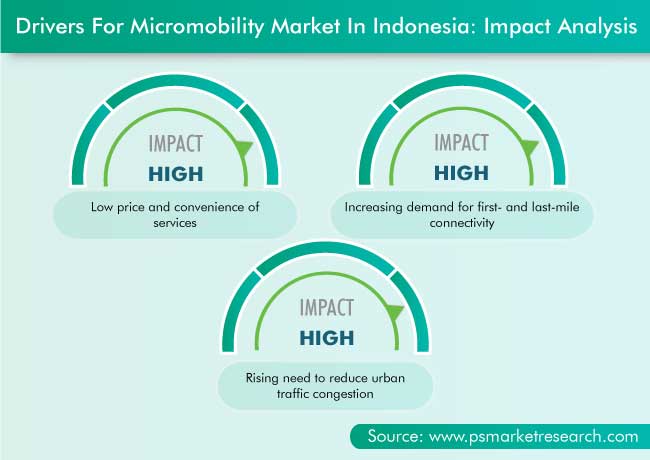 The demand for micromobility services in the country has been growing for the past few years owing to their easy availability, ease of functioning, and large-scale environmental and health advantages. The most-important criterion for a customer while selecting a service is cost. Micromobility provides a low-cost travel option, therefore attracts a huge number of customers. For instance, PT Migo Anugerah Sinergi charges $0.21 (IDR 3,000.0) per half an hour for its Migo e-bike sharing services, while Skutis Corporation charges e-scooter users $2.8 (IDR 40,000.0) for half an hour.

Micromobility provides several advantages as compared to other means of transportation, for instance, better connectivity to public transit hubs, reduced reliance on personal vehicles, and lower carbon footprint. These services also help in reducing the problem of traffic congestion on urban roads, since these vehicles are compact and require less space on roads and for parking. With the augmenting population in urban areas, the use of different means of personal transportation for short distances is surging, thereby making the urban traffic problem worse. This is poised to boost in the demand for micromobility in the country.

In recent years, players in the Indonesian micromobility market have been involved in facility expansions in order to attain a significant position. For instance:

Frequently Asked Questions About This Report
How much will the Indonesian micromobility market value in 2030?+

Why is the dockless sharing system preferred by Indonesian micromobility industry players?+

Companies in the Indonesian micromobility industry prefer dockless systems as they have no requirement for docks, or stations, which allows service providers to save on the initial investment.

What is the COVID impact on the Indonesian micromobility market?+

The micromobility market in Indonesia was positively influenced by the COVID-19 pandemic, especially after the lockdown here was lifted.

What is the major Indonesian micromobility industry trend?+

The EV battery swapping technology is trending in the Indonesian micromobility industry.

Major companies in the micromobility market of Indonesia are expanding their services and fleets.