From $8,526.7 million in 2019, the Indian heating, ventilation, and air conditioning (HVAC) market size is expected to grow to $31,598.6 million by 2030, at a CAGR of 16.0% during the forecast period (2020–2030). The key factors propelling the industry are the increase in the disposable income of people and growth in the commercial, industrial, and residential infrastructure investments in the country.

The India HVAC market growth is being negatively affected by the COVID-19 scenario, both on the demand and supply sides. Due to the lockdowns imposed in several countries to curb the spread of the disease, the manufacturing and import of such equipment to India have been severely hit. Similarly, non-essential commercial and industrial operations in India have also ceased, which has put a deeper dent in the manufacturing and supply of HVAC equipment. On the demand side, people are facing unemployment and salary cuts, which is why they are hesitating in buying such non-essential stuff. 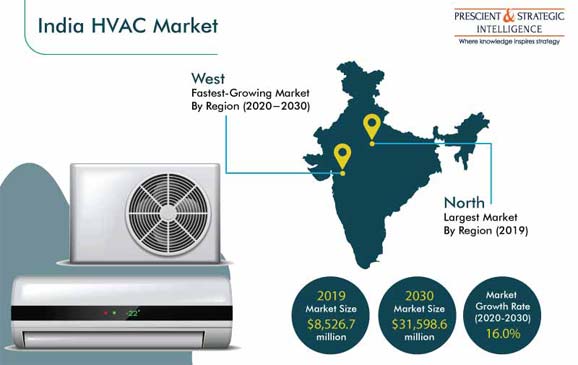 As per industry outlook, the cooling category, on the basis of equipment type, has dominated the India HVAC market during the historical period (2014–2019). Due to the subtropical climate of the country, all the sub-Himalayan regions of India witness hot and humid weather for most part of the year. In addition, urbanization has resulted in a rise in the disposable income, which has allowed people to spend freely on air conditioners.

Consulting To Be Fastest-Growing Service Type during Forecast Period

During the forecast period, the fastest advance in the India HVAC market will be witnessed by the consulting category, based on service type. Consulting services most often include an inspection by a trained professional, who identifies the issues and recommends maintenance or overhaul.

The commercial division, under segmentation by end user, held the largest share in the India HVAC market in 2019. The number of office complexes and shopping malls is rapidly rising in the nation, which is leading to the increasing installation of ventilation and air conditioning systems.

Presently, the northern part of the country holds the largest Indian HVAC industry share, due to the varying climatic conditions here. While Rajasthan, Delhi, Haryana, Madhya Pradesh, Uttar Pradesh, and Punjab have a predominantly hot climate, Uttarakhand, Jammu and Kashmir, Ladakh, and Himachal Pradesh experience long and freezing winters. This is leading to the increasing installation of cooling, as well as heating equipment in North India. Moreover, the purchasing power of the people living in the northern part of the nation is helping them purchase a variety of HVAC equipment.

The India HVAC market is projected to witness the highest CAGR in the western part of the country during the forecast period. This is attributed to the presence of major manufacturing hubs, including Ahmedabad, Mumbai, Nagpur, and Pune, in the region. All these and many more tier-II cities in West India are home to the manufacturing plants of numerous automotive and pharmaceutical companies, which generate a high demand for HVAC equipment, both for providing a comfortable working environment and meeting the compliance requirements.

One of the most noticeable trends in the India HVAC market is energy-efficient equipment. Due to the growing environmental concerns in the country, the preference is shifting toward HVAC equipment which uses less fuel and electricity, but provides the same or better efficiency than conventional variants. Additionally, the national government introduced a new Energy Conservation Building Code (ECBC), ECO Niwas Samhita, in 2018, for residential units. The aim of this energy-efficiency measure is to cut down the annual electricity consumption by 125 billion units by 2030. 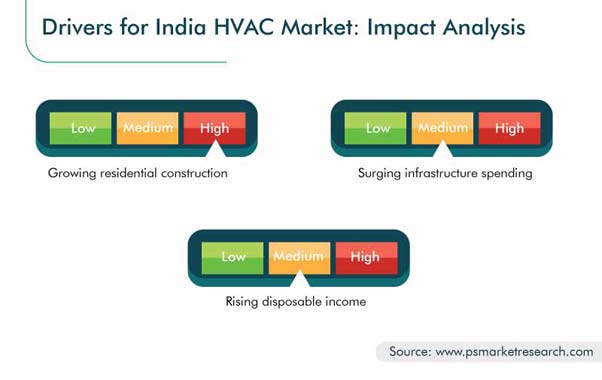 Just like residential units, the construction of commercial and civic infrastructure is also driving the growth of the India HVAC market. For instance, in 2019, $57 million were sanctioned for the construction of Delhi Metro’s Ghaziabad and Noida sections. A year ago, the construction of the Andheri–Chhatrapati Shivaji Maharaj International Airport and Dahisar–Mira Bhayander lines of Mumbai Metro were approved with a budget of $925 million. Similarly, beginning 2017, 100 airports are to be built in the country in the next 15 years. As HVAC systems are an essential deployment at metro stations and airports, the demand for them is set to witness a massive surge in the nation in the coming years.

Portfolio Expansion Key to Success in HVAC Market of India

In recent years, these and many other organizations in the Indian HVAC industry have looked at product launches as an effective way to survive in this competitive space, which continues to grow in size. 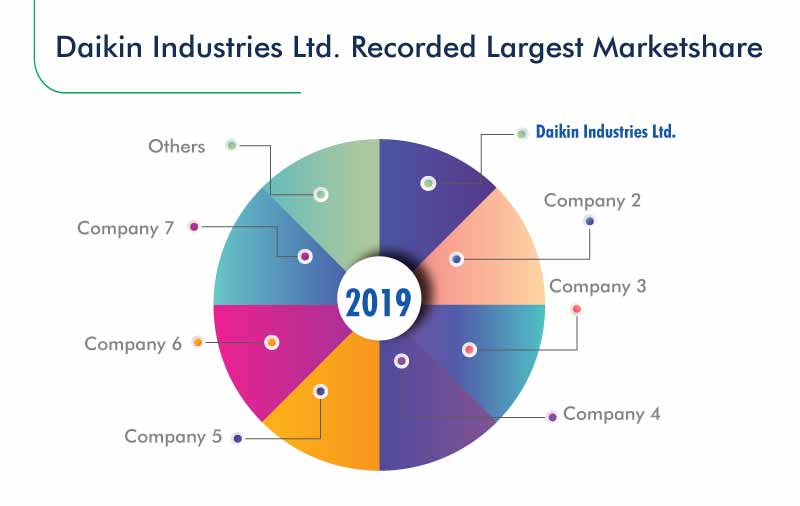