Globally, Asia-Pacific (APAC) held the largest revenue market share, of over 37%, in 2015, and is expected to witness a significant growth during the forecast period. This can be ascribed to the increasing use of methanol produced from hydrogen in gasoline, particularly in China, South Korea, and Japan. In addition, a high-volume demand for ammonia from China, India, and Malaysia is likely to propel the market for hydrogen storage, owing the requirement of hydrogen for ammonia production. 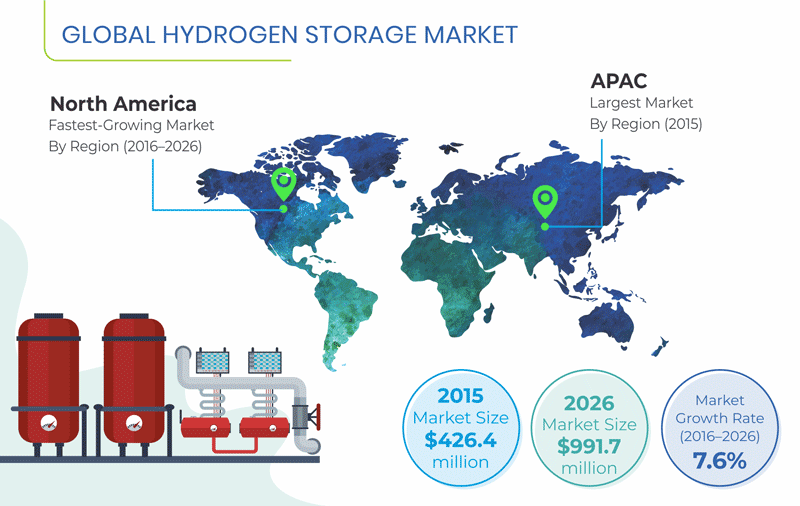 In the recent past, there has been an increase in adoption of hydrogen storage in the transportation sector. This is ascribed to its requirement to power fuel cell vehicles, owing to its high-storage performance and low cost. In addition, according to the World Nuclear Association, the demand for hydrogen in the production of transport fuels from crude oil is expected to witness a fast-paced growth in the coming years, which, in turn, is expected to further propel the growth of the hydrogen storage market. 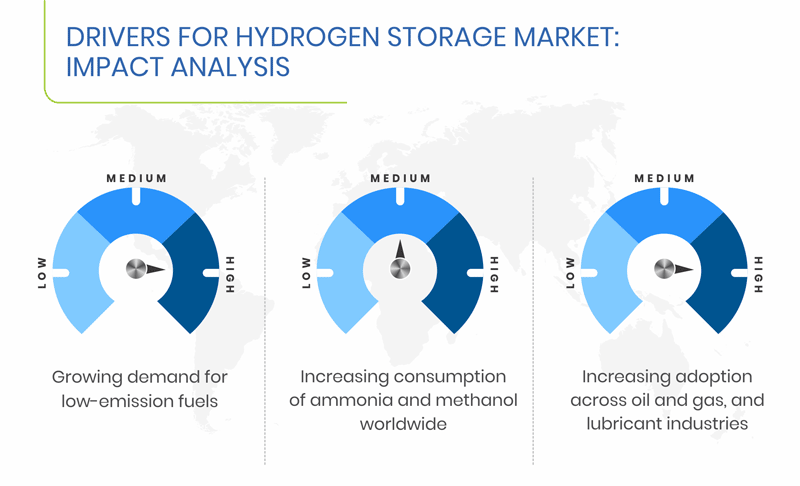 In recent years, increasing advancements in the fuel cells and hydrogen technologies, and favorable government initiatives such as new funding opportunity (FOA) have significantly benefited the global market. For instance, on May 10, 2016, the U.K. government invested $2.21 million to bring up an additional 100 hydrogen fuel cell cars and vans over the next few years. In addition, stringent emission regulations in China, South Korea, Japan, and India and the increasing the demand for ammonia and methanol are expected to further augment the growth of the market. Hence, with the increasing government initiatives for promoting usage of hydrogen storage technologies, the hydrogen storage market holds a strong potential of growth during the forecast period.

The physical category in terms of form of storage is expected to demonstrate faster CAGR during the forecast period. The storage of hydrogen in physical form makes it suitable for a wide range of applications, such as ammonia production, metal working, crude oil refining, and transportation. With the growth of end-use industries across the globe, the physical hydrogen storage market is projected to grow during the forecast period.

The stationary power category held the largest revenue share in terms of application, in 2015, in the hydrogen storage market. Hydrogen can be stored in stationary fuel cells having very low emissions to generate power through electrochemical reaction, suitable for situations when grid power is unavailable. In such cases, the backup power is used in the form of generators at airports, retail stores, hospitals, and several others.

The cylinder category based on type of storage held largest revenue share in the hydrogen storage market in 2015. This is ascribed its high-volume usage for storing gaseous hydrogen, in cylinders preferably at 150-200 bar pressure and under ambient temperature of 298K.

Geographically, the APAC region accounted for the largest share in 2015 in the global hydrogen storage market. The market in the region is expected to witness a significant growth during the forecast period, owing to the rapid increase in usage of methanol produced from hydrogen, along with adoption of eco-friendly transportation fuels. In addition, increasing demand for ammonia from manufacturing facilities located in China, India and several other South-Asian countries is projected to propel the demand for hydrogen storage in the region during the forecast period. 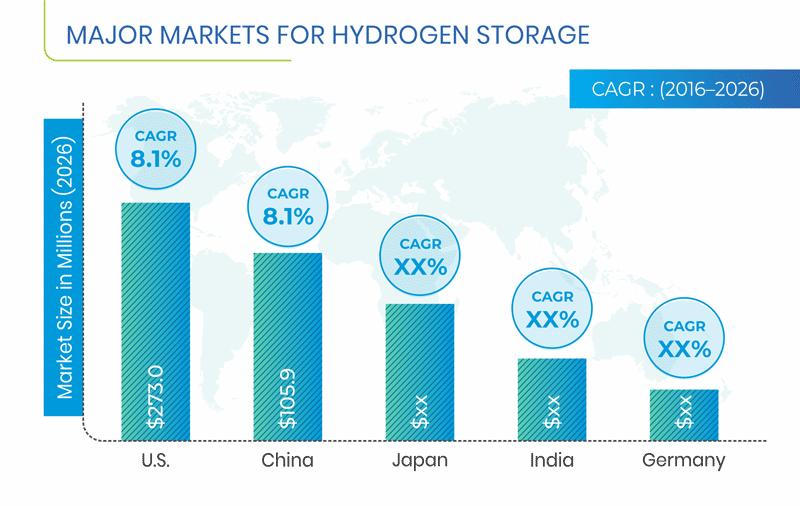 Some of the leading players operating in the hydrogen storage market include Air Liquide SA, Linde AG, Praxair Inc., Hexagon Composites ASA, INOXCVA, and Worthington Industries Inc., among several others.

Several players in the hydrogen storage market have taken strategic measures in order to gain larger share. For instance, in January 2017, Air Liquide SA, a France-based industrial gas supplier, commissioned world’s largest hydrogen storage facility in Texas. The facility has a capacity to back up a large-scale steam methane reformer (SMR) unit for 30 days.