The hydrogen market revenue stood at $136,185.0 million in 2019, and it is expected to witness a CAGR of 4.3% during 2020–2030. The key factors behind this growth are the soaring demand for ammonia, on account of the growing use of ammonia-based fertilizers to maintain crop nutrition and enhance productivity, and the surging demand for hydrogen from the refinery industry, due to the strict sulfur reduction norms.

However, the market for hydrogen recently came to a standstill due to the government-imposed lockdown on account of the COVID-19 outbreak. The operations of several industries, including crude oil refining, steel manufacturing, and chemical processing, were temporarily reduced or halted to curtail the spread of coronavirus. Moreover, border closures during the first and second quarters of 2020 had severely impacted the market growth due to hindrances in natural gas supply, which is used for hydrogen production. 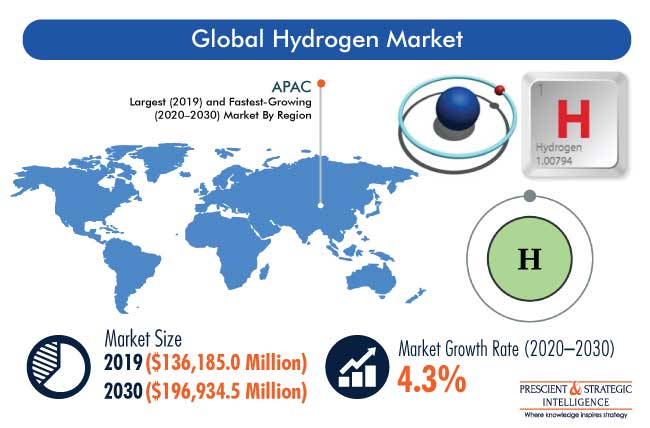 The steam–methane reforming category, under the production process segment, held the largest market share in 2019, as the production of hydrogen through this process is cheaper than via others. Moreover, a well-maintained supply chain and easy availability of the feedstock also added to this category’s dominance.

In the hydrogen market, the on-site generation category will witness the fastest growth in the distribution method segment in the coming years. On-site generation is a less-intricate method of transporting the gas to end users. Additionally, it is cost-effective than the tanker and cylinder methods, when used for a longer time (usually 10–15 years). Moreover, it enables companies to smoothen their operations by minimizing the risks associated with the supply chain.

The chemical industry accounted for the largest market share within the end user segment in 2019, and it is expected to continue this trend till 2030. Hydrogen serves as a raw material during the production of many basic chemicals, such as methanol and ammonia. The mushrooming demand for these chemicals on account of the booming population and burgeoning requirement for fertilizers will propel the consumption of the gas in the chemical industry.

The APAC region held the largest market share in 2019 due to the presence of numerous chemical and petrochemical companies, especially in India, China, South Korea, and Japan. According to the European Chemical Industry Council, China generated the highest revenue, of $1,341 billion, in the global chemical market in 2018. Moreover, the region is expected to dominate the hydrogen market during 2020–2030 due to the vast population and its high purchasing power owing to an increase in its income.

Additionally, the region will witness the fastest industry growth in the coming years. This will be due to the rapid economic growth and rapid shift of the manufacturing units of various end-use industries, such as electronics, chemical, and petrochemical, to APAC, due to the less-stringent environmental laws and reasonable cost of labor and raw materials here.

Apart from this, the metal processing and refinery industries in the region are expected to register notable growth due to the increasing support from government and non-government organizations. With the growth of these end-use industries, the market for hydrogen will advance tremendously. 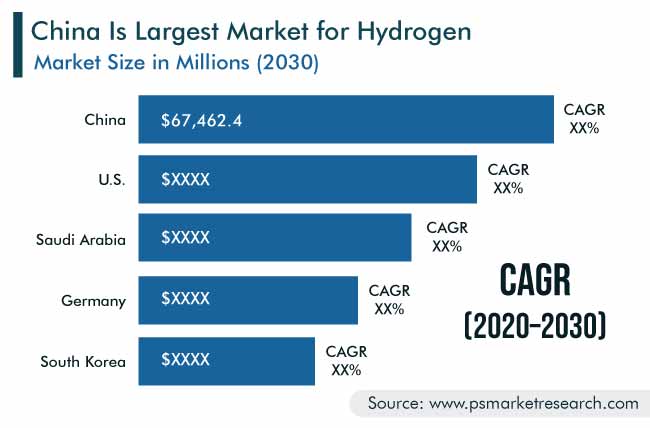 Mergers and Acquisitions Are Major Trends

Mergers and acquisitions among key players have become a key trend in the market for hydrogen. Through these strategic measures, market players aim to increase their share and expand their geographical presence. For example, in September 2020, General Motor Company acquired 11% shares in Nikola Corporation, a U.S.-based electric truck manufacturer. Under this deal, General Motor Company will aid Nikola Corporation in producing battery and hydrogen fuel cells for class 7 and class 8 semi-trucks, by supplying hydrogen fuel cells to the latter.

Another hydrogen market player, Linde Plc, acquired a minority stake in a U.K.-based company that manufactures polymer electrolyte membrane (PEM) electrolyzers, ITM Power Plc, in October 2019. These electrolyzers are used for the electrochemical splitting of water, for producing oxygen and hydrogen. With this investment, Linde Plc aims to become a prominent provider of integrated hydrogen energy solutions.

Arable land has been declining in recent years due to numerous environmental, human, and climatic factors. This has encouraged governments and farmers to use the available land in a judicious manner. According to the World Bank, per person arable land reduced to 0.19 hectares in 2016 from 0.2 hectares in 2011. Due to this reason, the requirement for fertilizers is surging, as they enhance the growth rate of crops and productivity of farms.

The agriculture sector is increasingly using nitrogen-based fertilizers. Ammonia, the key ingredient of nitrogen fertilizers, is produced by combining hydrogen and nitrogen. To meet the high demand for fertilizers, the production of ammonia needs to be amplified, which will, therefore, boost the hydrogen demand in the coming years.

The growth of the hydrogen market is also facilitated by the increasing use of the gas in the refining industry for cracking long-chain hydrocarbons into shorter chains and removing sulfur compounds from crude oil during the production of gasoline. In this regard, the high-volume production of heavier crude oil is fueling the demand for hydrogen. Heavier, as well as sour, crude oil requires extensive processing, which involves the consumption of the gas in large quantities. Additionally, the strict environmental legislations to minimize the sulfur content in the oil have resulted in a heavy consumption of hydrogen in refineries. For example, the International Maritime Organization (IMO), on January 1, 2020, put a new 0.5% cap on the sulfur quantity in fuel, which was formerly 3.5%.

The hydrogen market is highly consolidated in nature, with the presence of three major players: Air Products and Chemicals Inc., Linde Plc, and Air Liquide S.A.

In recent years, these players have entered into various mergers and acquisitions in order to capture a larger share in the industry. For instance, 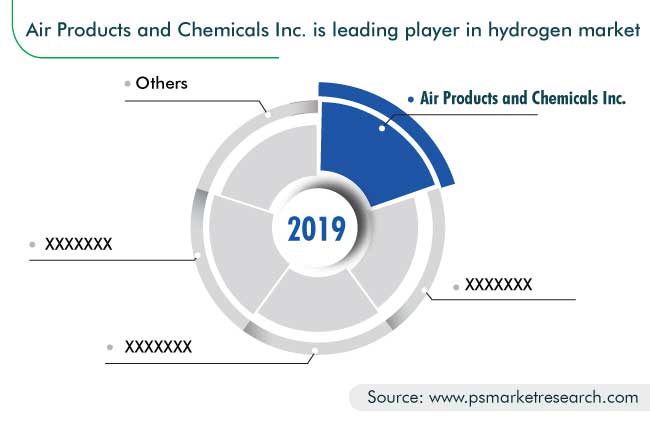 Some Key Players in Hydrogen Market Are:

Based on Production Process

Based on Distribution Method