The energy storage market size was 171,039.3 Megawatts (MW) in 2019, and it is expected to advance at a CAGR of 3.3% during 2020–2030. Key factors behind the industry growth are the rising emphasis on renewable energy sources, declining cost of batteries, and surging concerns over the high pollution levels due to the burning of fossil fuels. Moreover, the high costs of securing the energy supply facilitate the market growth.

However, the COVID-19 crisis has had a negative impact on market stakeholders, such as component manufacturers, contractors, and utility companies. The deferment or cancelation of projects, logistical delays, difficulty in procuring the equipment, and delay in securing the requisite permits have resulted in an energy storage industry slowdown. These factors resulted in reduced revenue and workforce layoffs. As a result, the stakeholders will have to rally through hard times till the demand for energy storage products rises from the second quarter of 2021 onward.

However, the negative impact of COVID-19 is expected to reduce in the long run due to the response from policymakers and regulators. The recovery of this energy storage market can be essentially credited to the supportive government policies related to transmission system operators (TOSs) and distribution system operators (DSOs) and increasing focus on generating power from cleaner resources. 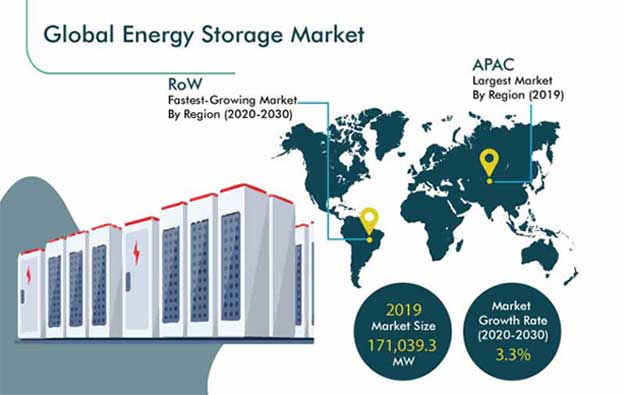 The mechanical category, under the type segment, accounted for the largest share in the market for energy storage solutions during 2015–2019. The high adoption of mechanical storage systems can be owed to their sheer storage capacity, favorable economics, and ability to maximize natural resources. This category is further classified into pumped hydro storage (PHS), liquid air energy storage (LAES), compressed air energy storage (CAES), and others, including flywheels. Among these, the PHS category accounted for a monumental size due to the presence of a considerable number of storage systems using water reservoirs.

APAC was the largest user of energy storage solutions during 2015–2019 owing to the high-volume project engineering, procurement, and construction (EPC) activities in India, Japan, and China. Moreover, the highest storage capacity is expected to be added in APAC, which will observe the second-fastest energy storage market growth, during 2020–2030. At present, Asian power utilities consider energy storage systems the next level of upgradation in smart grid technologies. With the increasing demand for stable grids and increasing focus of government on smart grids, the region is expected to increase its investment in these technologies.

The governments of Japan, India, and China are using smart grid community systems to deliver electricity. The rising interest in grid-tied storage technologies in APAC can be owed to the escalating non-conventional energy generation and decreasing reliance on conventional modes of power production.

The LATAM and African regions will register a rapid surge in the industry revenue till 2030. This is ascribed to the rising interest in the potential of battery storage systems and pump hydro electrical systems (PHES) in these regions. Besides, the dipping raw material prices have encouraged regional governments to employ these systems and reduce the base power deficit.

In recent years, Iran, Israel, Argentina, and South Africa have installed thermal energy storage systems or PHSs, whereas other LATAM and Middle Eastern nations, including Qatar and Haiti, have integrated a series of battery-based systems in their energy mix. In the coming years, these countries are expected to ramp up the installation of such systems, which will be a major boost to the energy storage market in the Rest of the World (RoW). 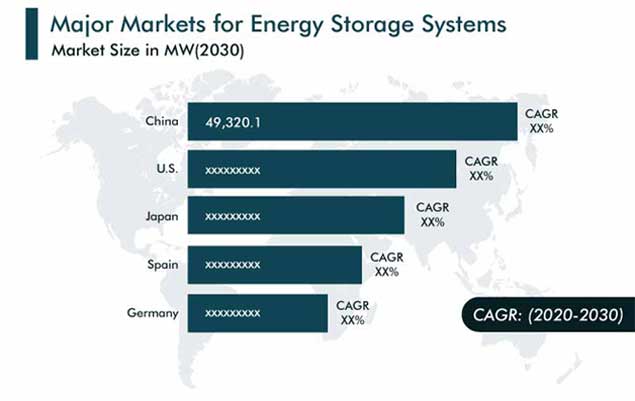 The demand for energy storage systems is driven by the increasing need to reduce the dependence on oil, gas, and coal for electricity generation. Renewable-energy power plants use storage technologies to deal with the variable outputs offered by such energy sources, as these technologies smoothen out the electricity supply and ensure that it meets the demand.

Additionally, the quick discharge of power to the grid enabled by storage technologies also supports the market growth. Unlike fossil-fuel-based energy generation systems, which take longer to ramp up and deliver full power, these technologies help in saving considerable time. The rapid response is vital for ensuring the stability of the grid during times of unexpected electricity demand. 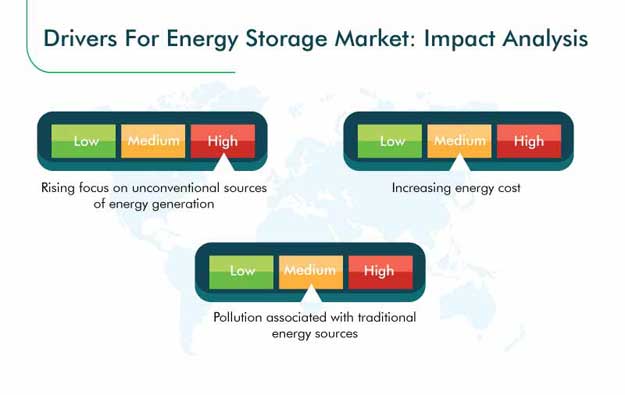 Power plants are running at full capacity to meet the high demand, thereby resulting in the increasing electricity cost. Moreover, constraints such as the unavailability of a regular fuel supply and high logistics and downstream costs have resulted in the volatile prices of energy. Owing to these factors, the world has increased its focus on energy conservation, which is why the energy storage market is growing. Such systems are deployed to store energy when the prices are low or in cases of surplus energy generation, and the stored energy can be used when the cost of power or the demand for it surges.

Conventional power sources, such as oil, natural gas, and coal, have a negative impact on the environment upon being combusted. Thus, governments across the globe have been encouraging the use of power storage systems employing non-conventional and cleaner forms of energy generation. These systems are used to store the excess power for later use, in situations of low energy production or high electricity demand. Thus, the growth of the market for energy storage solutions is thriving on the rising emphasis on sustainable and pollution-free energy sources. 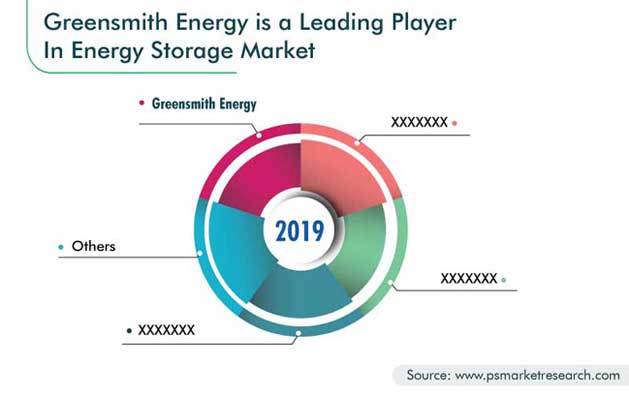