Moreover, the country has the third-largest urban population in sub-Saharan Africa, after South Africa and Nigeria. An additional 1 million residents are moving to cities every year. This is credited for the increase in the demand for standalone and backup power sources, primarily in offices, residential buildings, retail stores, hospitals, and hotels. Furthermore, these generators are required for construction, manufacturing, power, and oil & gas applications.

Furthermore, infrastructure development is a top priority for the government. The significant increase in the development of airport, telecom, and land transportation infrastructure, is expected to drive the demand for diesel generator sets in the country during the forecast period. 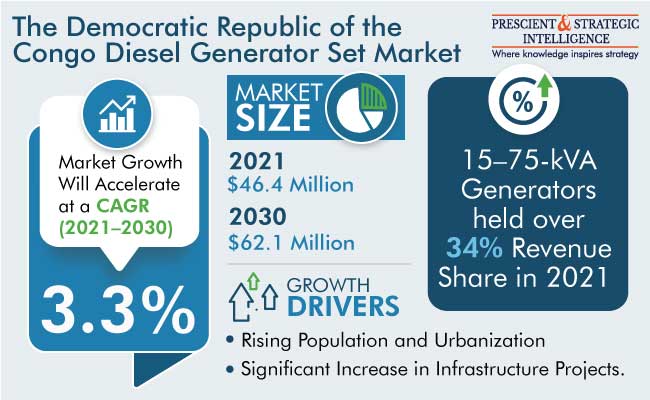 The 15–75 kVA category held the largest share in the industry, and it is projected to grow at a significant CAGR, of 3.7%, during 2021­–2030, based on power rating. The demand for these generators primarily arises in the residential sector, which accounts for around 35% of the total electricity consumption in the country. Additionally, most of the generator sets used in residential societies are between 15 kVA and 75 kVA in rating.

Moreover, 751–1,000-kVA generator sets accounted for the second-largest share, owing to the fact that industry accounted for 20% of the DRC’s economic growth in real terms and making a total of around $7 billion of the exports in 2020. For instance, the mining sector requires high-power-rating generators for the extraction and processing of metallic ores. 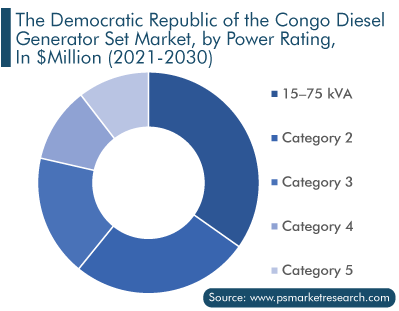 In 2021, the industrial category held the largest Democratic Republic of the Congo diesel generator set market share, and it is predicted to grow at a CAGR of 3.1% during 2021–2030. The industrial sector is a major contributor to the DRC’s economy. The mining sector plays a significant role in the world's supply of cobalt, diamonds, copper, gold, tantalum, and tin; DRC produces around 70% of the world’s cobalt. It is the Democratic Republic of the Congo's largest source of export income.

Moreover, the manufacturing sector is composed of small domestic players, who mostly rely on foreign investments. Brazzaville, Kayes, Pointe-Noire, Loubomo, and the Niari Valley are the major industrial hubs of the country. Majorly, the factories manufacture processed foods (especially sugar and flour) & beverages and textiles & clothing. 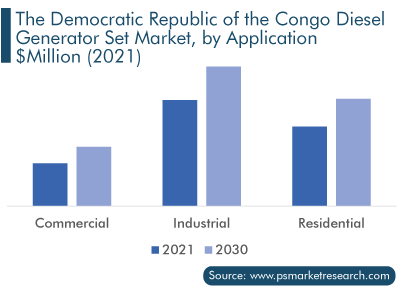 The country continues to attract investments from regional operators as well as the national telco, SCPT, for extending the network of fiber across several cities. In 2021, LIT completed the laying of a 5,000-km fiber cable that linked up several areas of the country, while it has also teamed up with Facebook to lay an additional 2,000 km of cables.

Additionally, in the recent past, many licenses have been issued for the launch of services and networks in the country. As per the ITA, mobile telephony has a 44% penetration rate in the country, the internet penetration is approximately 3% of the total population, and 3G/4G is still in the developing stage. The investments will boost internet connectivity, mobile phone sales, and telecom equipment supply and aid in the development of telecom software, new technologies, and cybersecurity solutions. Thus, the development of the telecom infrastructure is driving the demand for diesel generator sets in the country.

Top Players of Diesel Generator Sets in The Democratic Republic of the Congo Are:

Frequently Asked Questions About This Report
How big is the Congo diesel generator set market?+

The diesel generator set market in Congo valued $46.4 million in 2021.

The power rating segment of the Congo diesel generator set industry is dominated by the 15–75 kVA category.

What are the significant industries in the Congo diesel generator set market?+

Mining, food & beverages, textile & clothing, telecom, and constructions are the significant industries in the diesel generator set market of the Congo.

Why is the Congo diesel generator set industry growing?+

The Congo diesel generator set industry is growing because of the rising population and rate of urbanization.

What are the lucrative areas within the country for the Congo diesel generator set market players?+

Players in the diesel generator set market of the Congo should look to invest in Brazzaville, Kayes, Pointe-Noire, Loubomo, and the Niari Valley.