The global cleanroom consumables market stood at $7,938.7 million in 2015 and is expected to progress at a CAGR of 4.7% during 2016–2022 (forecast period). The market is primarily being driven by the growth in the pharmaceuticals & biotechnology industry and increasing demand for cleanroom consumables in the medical device and electronics industries, as these consumables play an important role in maintaining the quality of products manufactured in these industries. Besides, the increasing adoption of these products in the aerospace, optical, defense, and food industries is expected to drive the market in the near future. 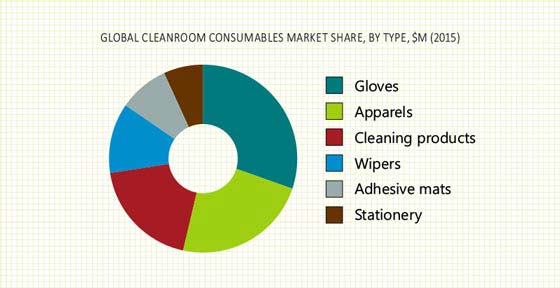 Based on type, the cleanroom consumables market is classified into apparel, cleaning products, stationery, wipers, gloves, and adhesive mats. Among these products, gloves held the largest share in the market, accounting for 30%, in 2015. This can be mainly ascribed to the growth in demand for cleanroom spaces in the pharmaceuticals & biotechnology industry, which further resulted in the demand for consumables used in such settings.

The growth of the cleanroom consumables market is expected be hampered by factors such as stringent regulations with respect to the manufacturing of cleanroom products and the high cost of raw materials used in product manufacturing. Regulatory bodies across the globe have formulated standards that have to be followed for the manufacturing of pharmaceutical and biotechnology products. Besides, considering the high cost of the raw materials used for manufacturing these products, many companies show reluctance toward making heavy investments to enter the market, which, in turn, limits the market growth.