The global benign prostatic hyperplasia treatment market was valued around $10 billion in 2020, which is projected to grow with healthy growth rate during the forecast period (2021–2030). The major factors behind the growth of the market are the increasing aging population, rising awareness about prostate cancer and its treatment, growing technological advancements in personalized medicine, increasing adoption of minimally invasive procedures, and improving healthcare infrastructure across the world.

As a result of the COVID-19 epidemic, governments in several nations have taken strategic measures to protect citizens, such as lockdowns and social distancing. The economic crisis generated by the epidemic has had a negative impact on manufacturers across the globe, including those of BPH drugs and surgical devices. Furthermore, the availability of raw materials has been significantly affected due to the government limitations on internal and international trade to contain the spread of the virus. This further restrained the growth of the BPH treatment market by affecting the manufacturing of active pharmaceutical ingredients (APIs) due to the shortage of raw materials. 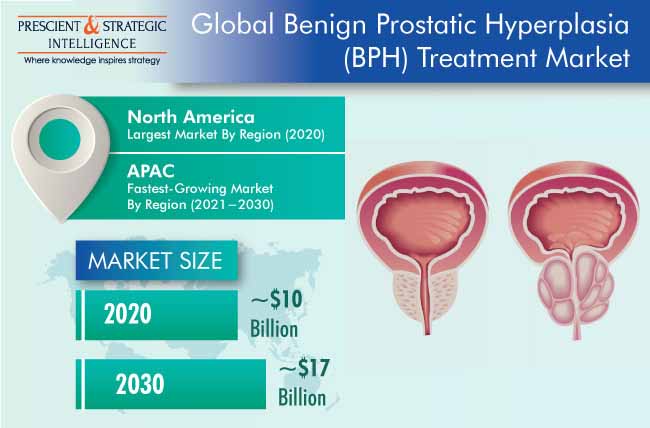 Due to Preference for Drugs for Management of Disorder, Drug Treatment Category Was Larger

The drug treatment category had the larger share in 2020, based on type. This was majorly due to the high adoption of medicines to manage and treat the disorder at the acute and sub-acute levels. In addition, medication is prescribed for post-operative treatment, which leads to their higher consumption compared to surgical devices.

Due to Rising Preference for Comfort during Pre- and Post-Operative Care, Home Healthcare Settings Category To Grow Fastest

The home healthcare settings category is expected to witness the fastest growth during the forecast period in the benign prostatic hyperplasia treatment market, based on end user. This is ascribed to the rising use of drugs and devices that are used for pre-surgical treatment. In addition, patients are also prescribed medication for a few weeks after being discharged from the hospital, which is majorly consumed at homes.

Geographically, North America generated the highest revenue in the benign prostatic hyperplasia treatment market in 2020. This is mainly attributed to the increasing geriatric population, which is highly susceptible to BPH and other lower urinary tract diseases. In addition, the rising number of innovations in BPH devices, increasing awareness about the condition, and enhanced reimbursement coverage continue to boost the volume of BHP treatments in the region. 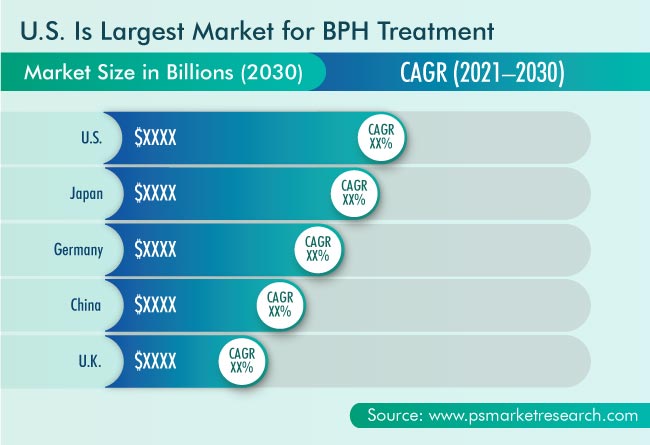 Surgery is a better alternative to the management of BPH via medication, but patients have a higher preference for medication due to the post-operative damage to the body caused by surgical cuts and burns. The development of minimally invasive procedures has brought about a change in patients’ perception and given surgical device manufacturers a competitive edge. For instance, in August 2020, the UroLift enhanced tissue control system was developed by Teleflex Inc. to treat people with BPH. Small implants that retain the prostate lobes in a retracted position can be inserted into the system to open the urethra. The device is designed to treat patients with difficult a prostatic architecture, such as those who have big lateral lobes and an obstructive median lobe.

According to the United Nations Department of Economic and Social Affairs (UNDESA) report on the global aging population, the number of people aged 65 and above is rapidly increasing, and it would more than double by 2050. The increase in research and development (R&D) activities to treat the prostate condition, especially in the senior population, which requires additional care, have enhanced BPH treatment devices, thus supporting the worldwide benign prostatic hyperplasia treatment market advanced.

In recent years, the players in the market have engaged in product launches to offer better treatments than other competitors. For instance,

Frequently Asked Questions About This Report
What will be the value of the global BPH treatment market in 2030?+

The value of the global BPH treatment market will be $17 billion in 2030.

Which end user category dominated the BPH treatment industry in 2020?+

Which will be the faster growing type category in the BPH treatment industry during 2021–2030?+

The drug treatment categroy will register the faster growth, under the type segment, in the BPH treatment industry during 2021–2030.

How did the COVID-19 pandemic impact the BPH treatment industry?+

The COVID-19 pandemic massviely hampered the growth of the market for BPH treatments.

What is the current major trend in the market for BPH treatments?+

The major trend currently being observed in the market for BPH treatments is product approvals and launches.